Our journey to Hendaye was uneventful, although it was delayed slightly due to some trouble with the doors (the announcement was in French so we didn't completely understand!) But this wasn't a problem as we had an hour to kill in Hendaye before getting the overnight sleeper to Lisbon. 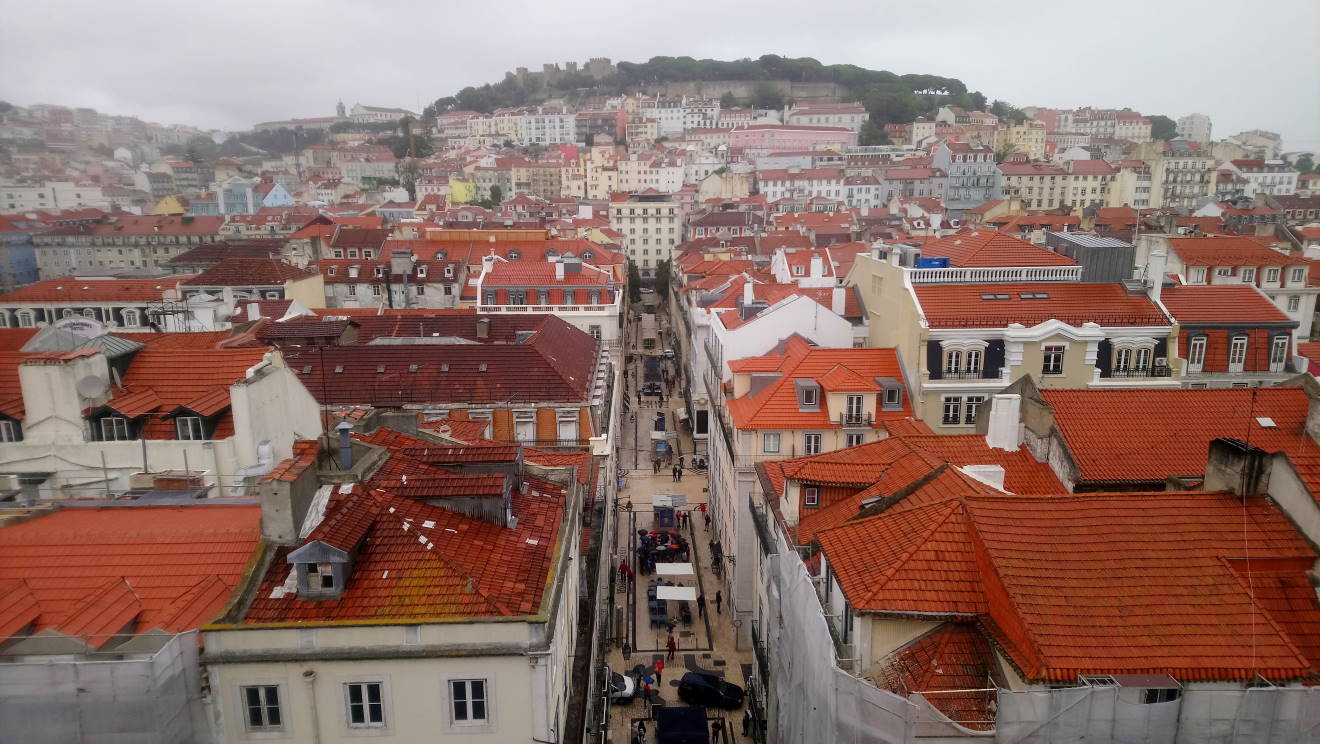 We were sleeping in separate, single sex cabins and after introducing ourselves to our companions for the night, we headed to the buffet car. We met a few English people, a couple called Corinne and Gareth from Sawbridgeworth and a lady called Charlotte whose mum lives in Portugal. The waiter in the buffet car was anything but service with a smile and the food was somewhat questionable, but reasonably priced for a train and a captive market. For example, the vegetarian main option was rice with boiled carrots and broccoli, while the fruit salad was a whole apple and a knife! 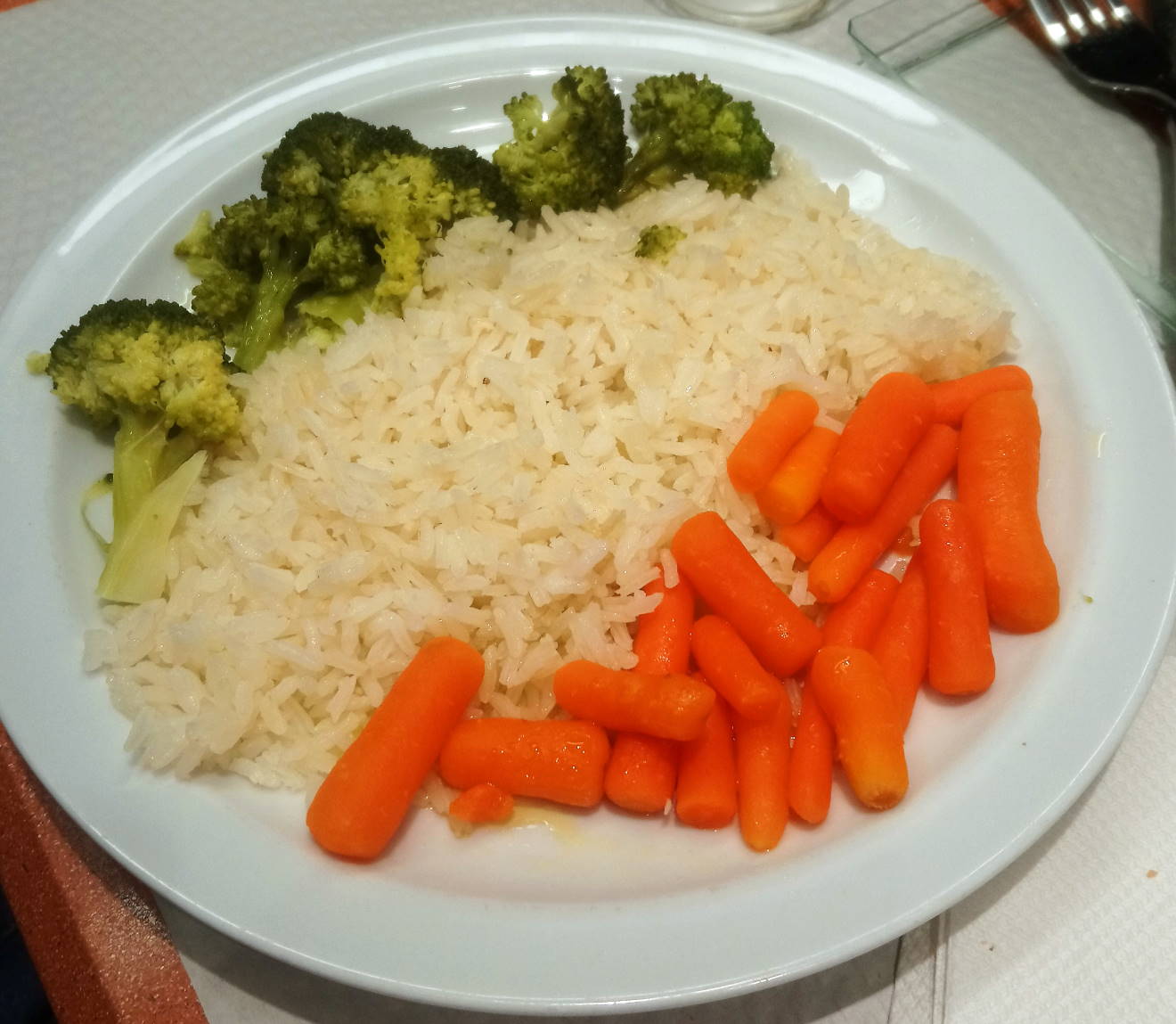 We spent a few hours in the bar with Corinne and Gareth before bunking down for the night. It was a somewhat broken night’s sleep, as the train was quite noisy and hot, but it was comfortable enough and we arrived bright and early into Lisbon the next day.

We jumped on the metro to Restauradores, where we had breakfast in a lovely cafe off the main Avenue da Liberdade before heading to our apartment to drop our bags.

Without much forethought to what we wanted to do in Lisbon, we caught the bus to the tile museum, which was a little way out of town. It was pretty interesting, the highlight being the church which is absolutely covered in tiles and gold. It was quite impressive! 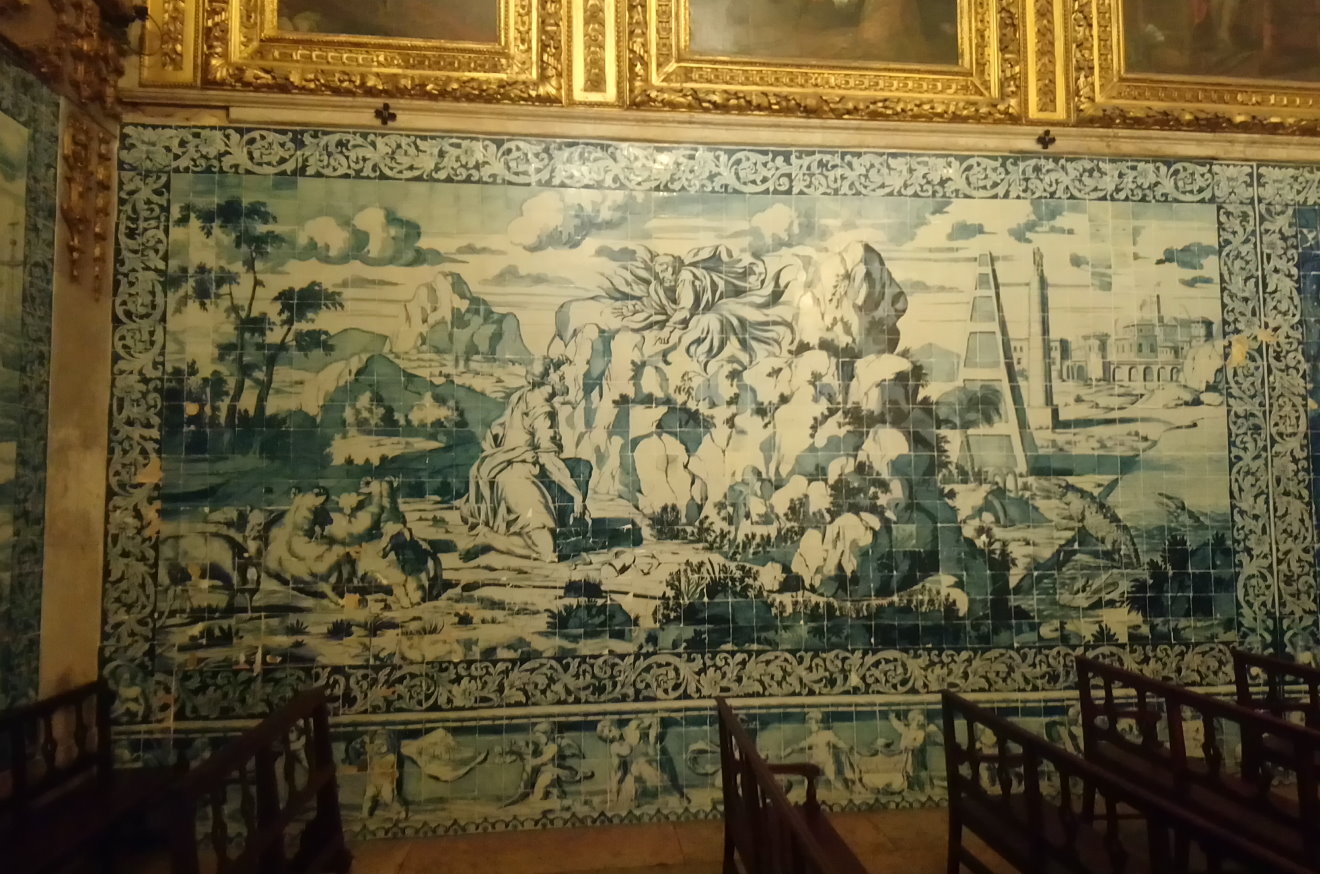 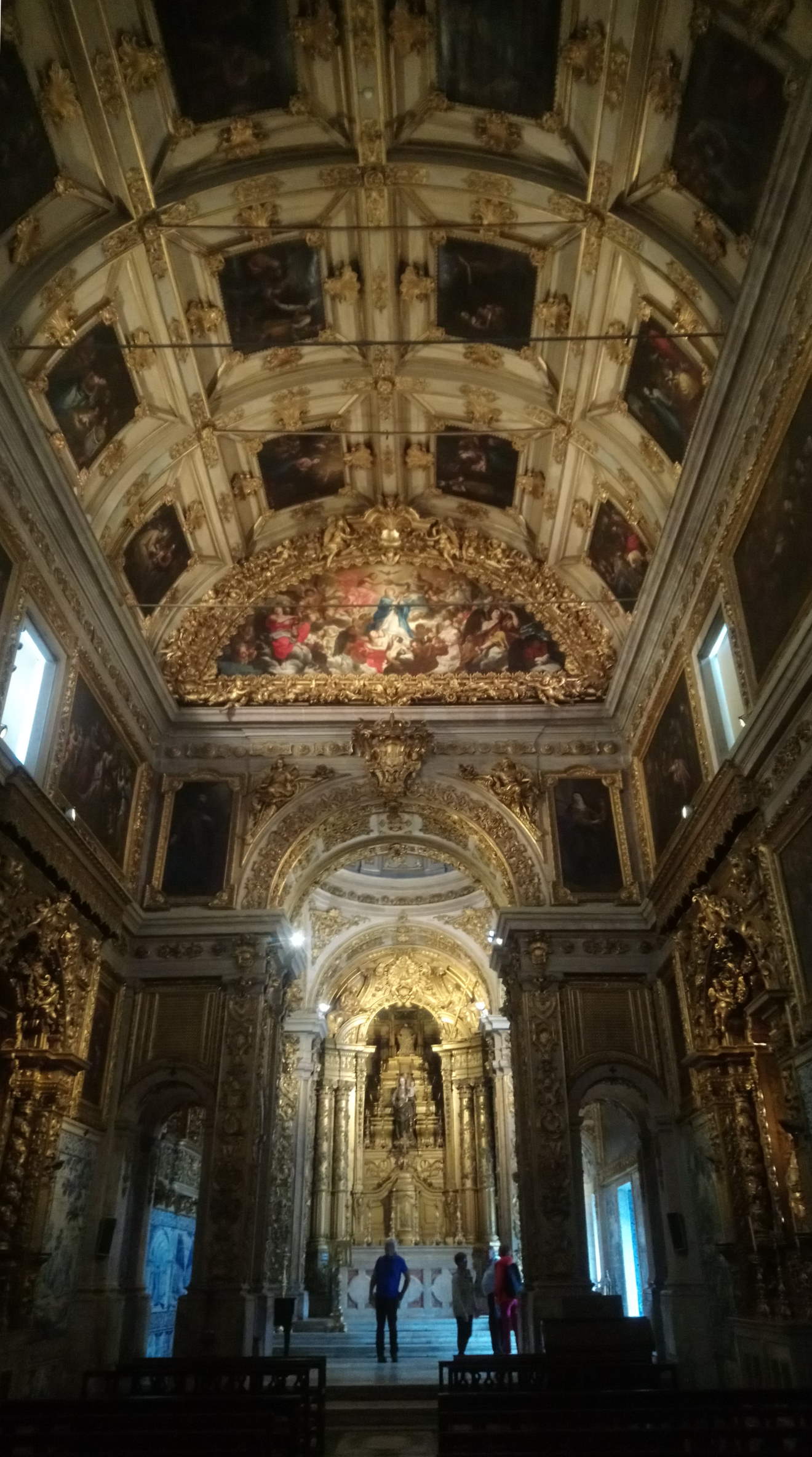 We caught the bus back to the city centre and visited the Time Out Market for lunch, an indoor market with various food and wine stalls and a communal eating area in the middle. Following the recommendation from Netflix’s “Somebody Feed Phil”, we opted for the croquettes (the chicken curry ones were the best) followed by the first of many pastel de nata. These little custard tarts are just heavenly, with a perfect crunchy pastry and smooth set custard filling. Delightful! 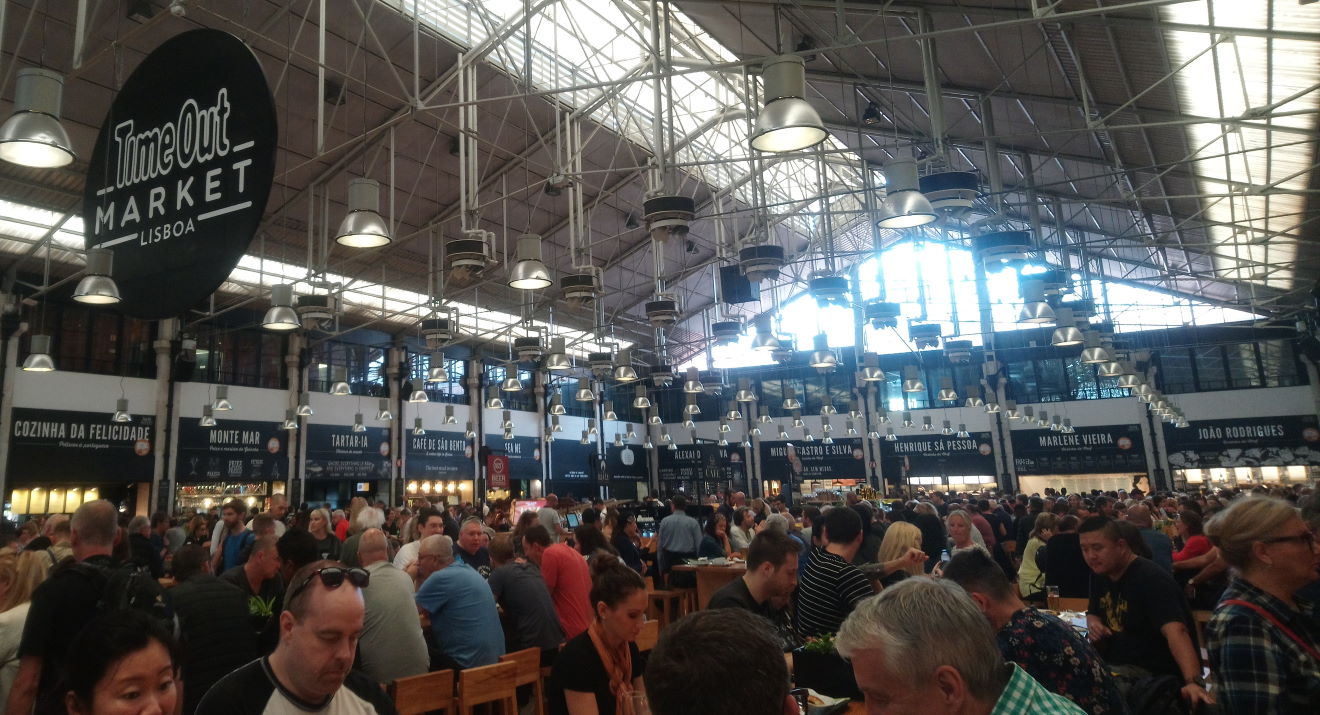 Many of the buildings in Lisbon are covered in tiles and the majority of the roads and pavements are made up of mosaics, with some really impressive patterns. However it does make it slightly challenging to walk around as the city is very hilly and the pavements are very polished! It’s worth taking shoes with good grip! 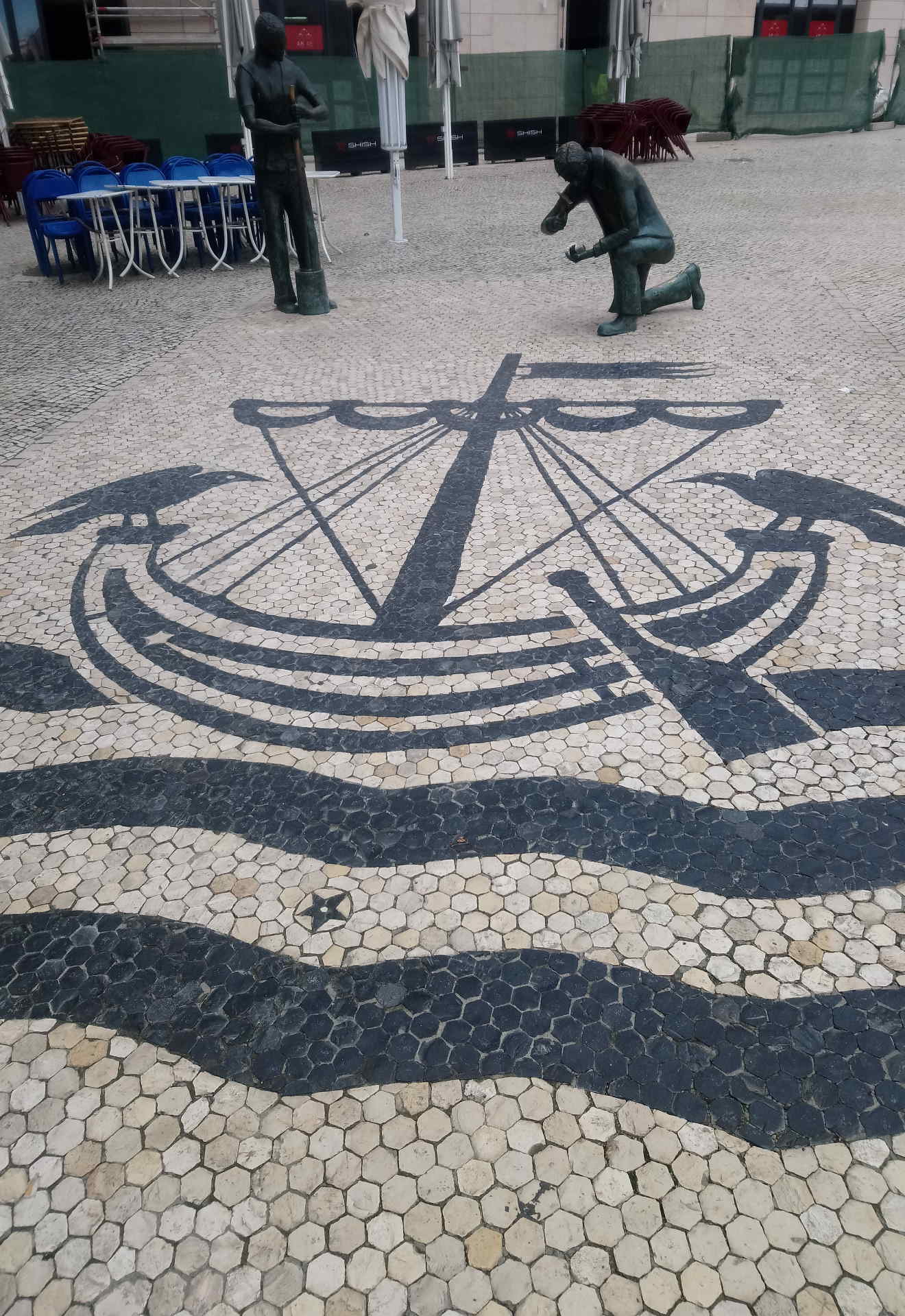 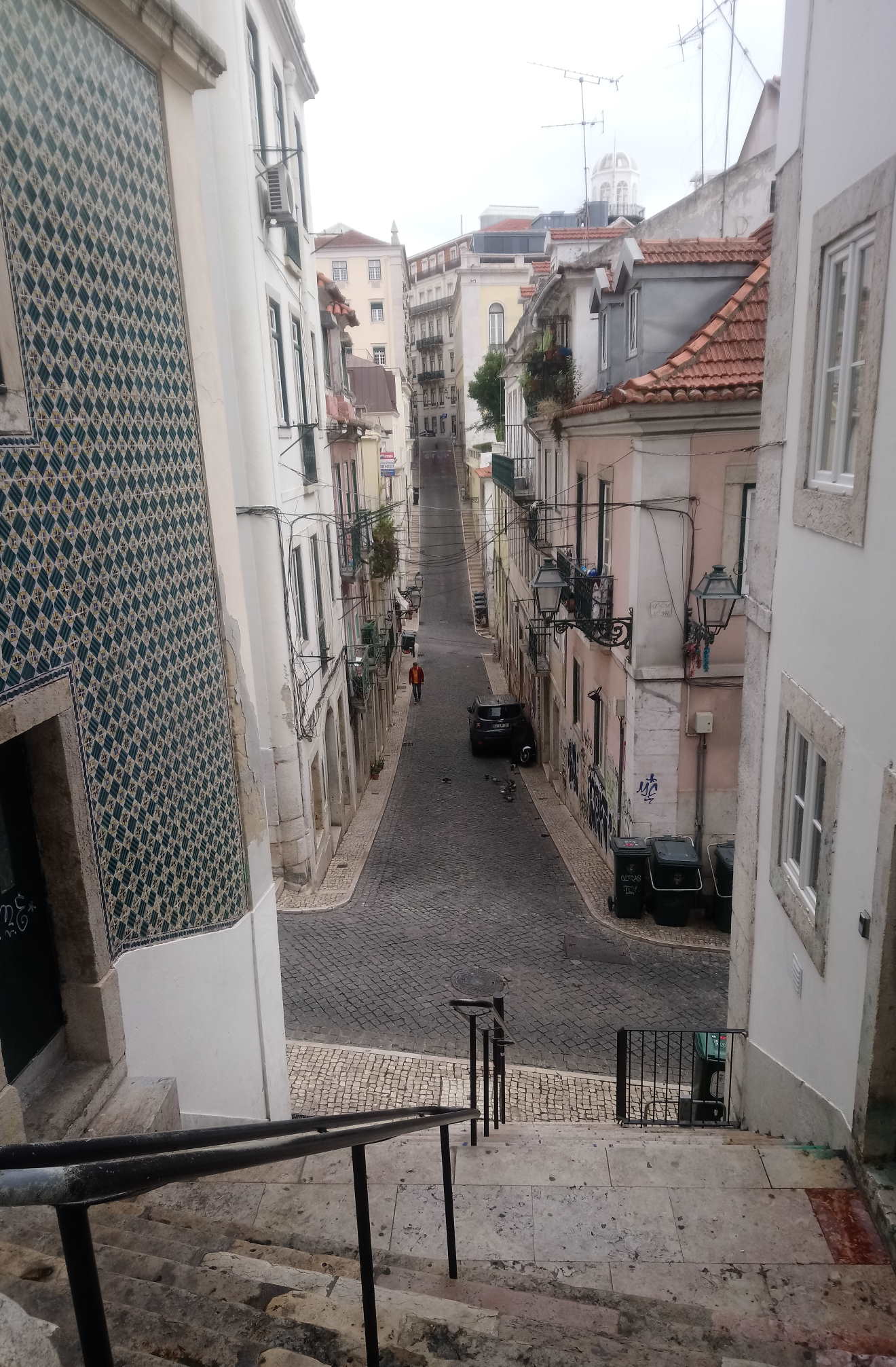 We spent the afternoon wandering around the western side of the Avenue da Liberdade, taking in the scenery at a couple of view points. At the top of the hill is the botanical gardens and the natural history museum so we killed some time there while we waited for our room to be ready. There was a good exhibition on plastic in the oceans as well as lots of rocks and dinosaur exhibitions to look at.

When we arrived at our apartment, our hosts gave us loads of good tips of where to go for food and drink so we decided to head out to a bar before going for dinner, as everyone eats a lot later in Portugal. Coincidentally, my sister and her boyfriend were also in Lisbon at the same time as us, so we met for a drink at the Lost In rooftop bar, which had a lovely view from the terrace until it started to rain so we decamped inside. 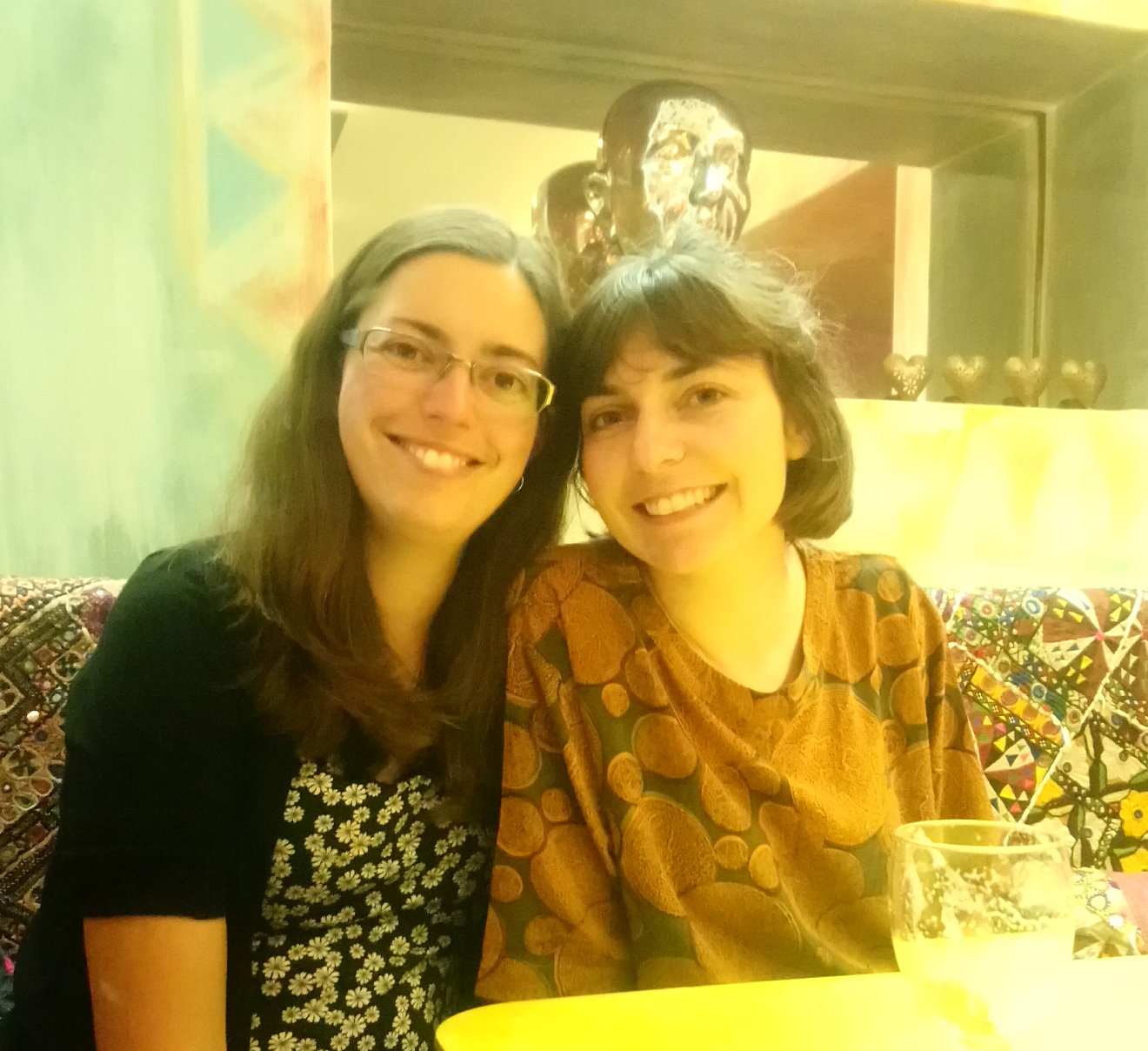 For dinner we went to an excellent pizza restaurant in Bairro Alto, a lively area full of restaurants and bars. Afterwards we stopped at a bar for a drink and some live music from a piano/double bass duo. The only downside was that despite smoking being banned inside in Portugal, this isn’t really adhered to, so we called it a night after a few songs. 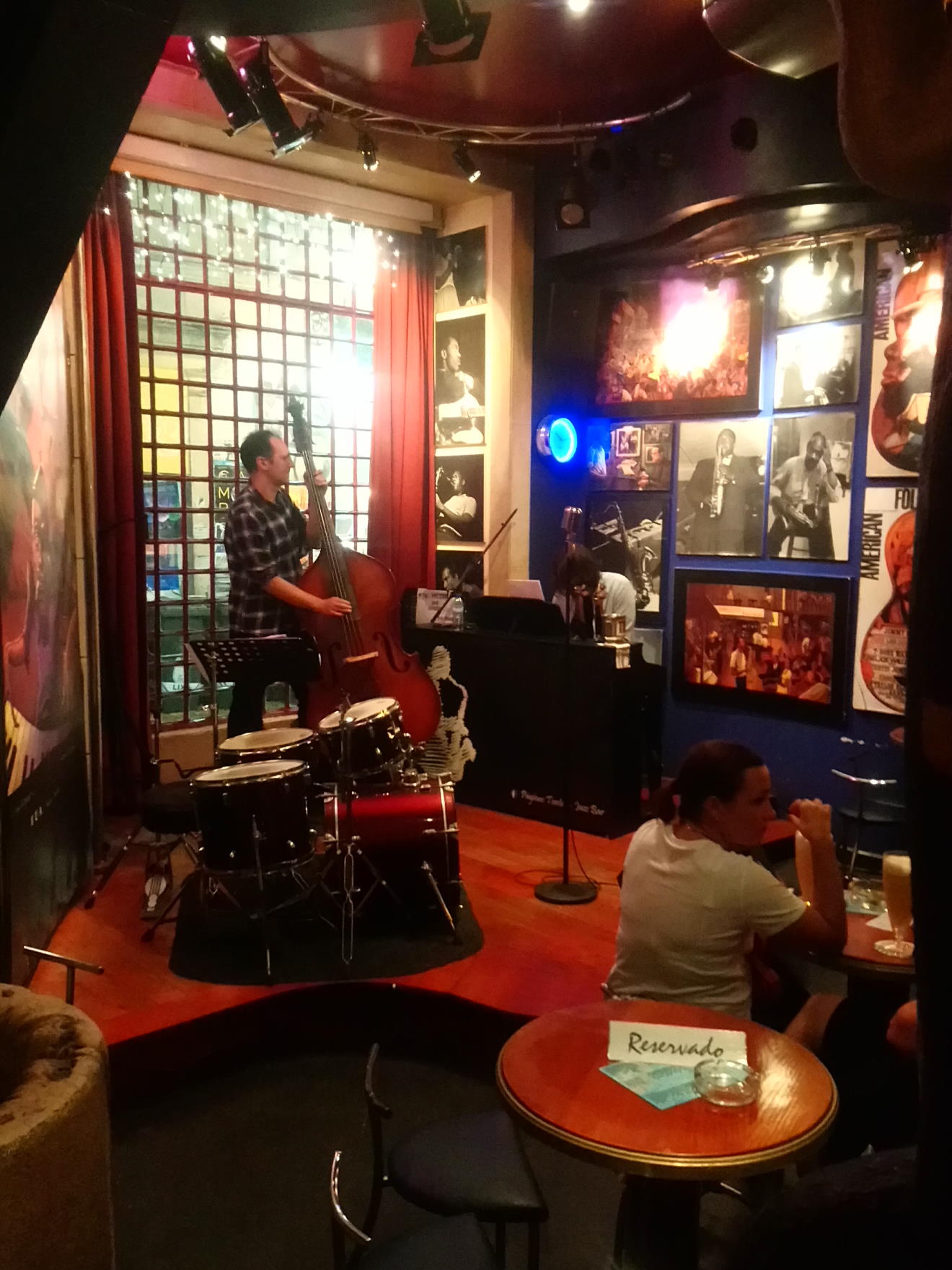 The next morning after another excellent breakfast, we took the train to Sintra, a town nearer the Atlantic coast about 45 minutes outside of Lisbon. Being a Friday and a very popular destination, the queue to buy train tickets was huge! So to avoid the queue, we popped to the metro station next door, topped up our tickets and jumped on the next train out. Much quicker!

Sintra is made up of seven different palaces, and our hosts had suggested two to visit. The first one was Quinta da Regaleira, about a 20 minute walk from the station, past the Palácio Nacional de Sintra. The complex comprised of various paths through the gardens but the main features were a couple of wells that you could walk down, a range of cave systems and various towers you could climb to get a good view. It was all a bit artificial, but we had a great time exploring all the different routes, caves and the palace. 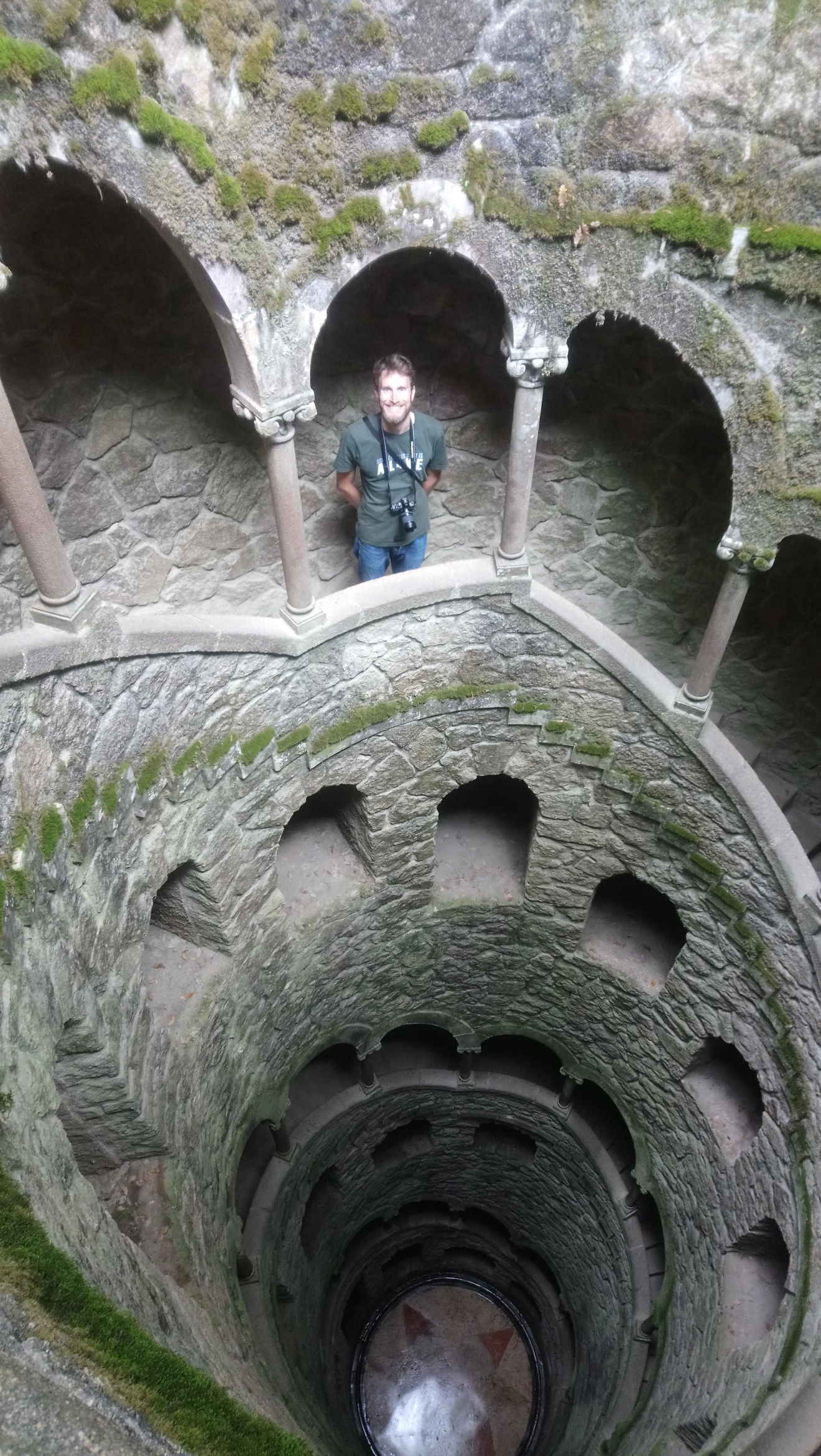 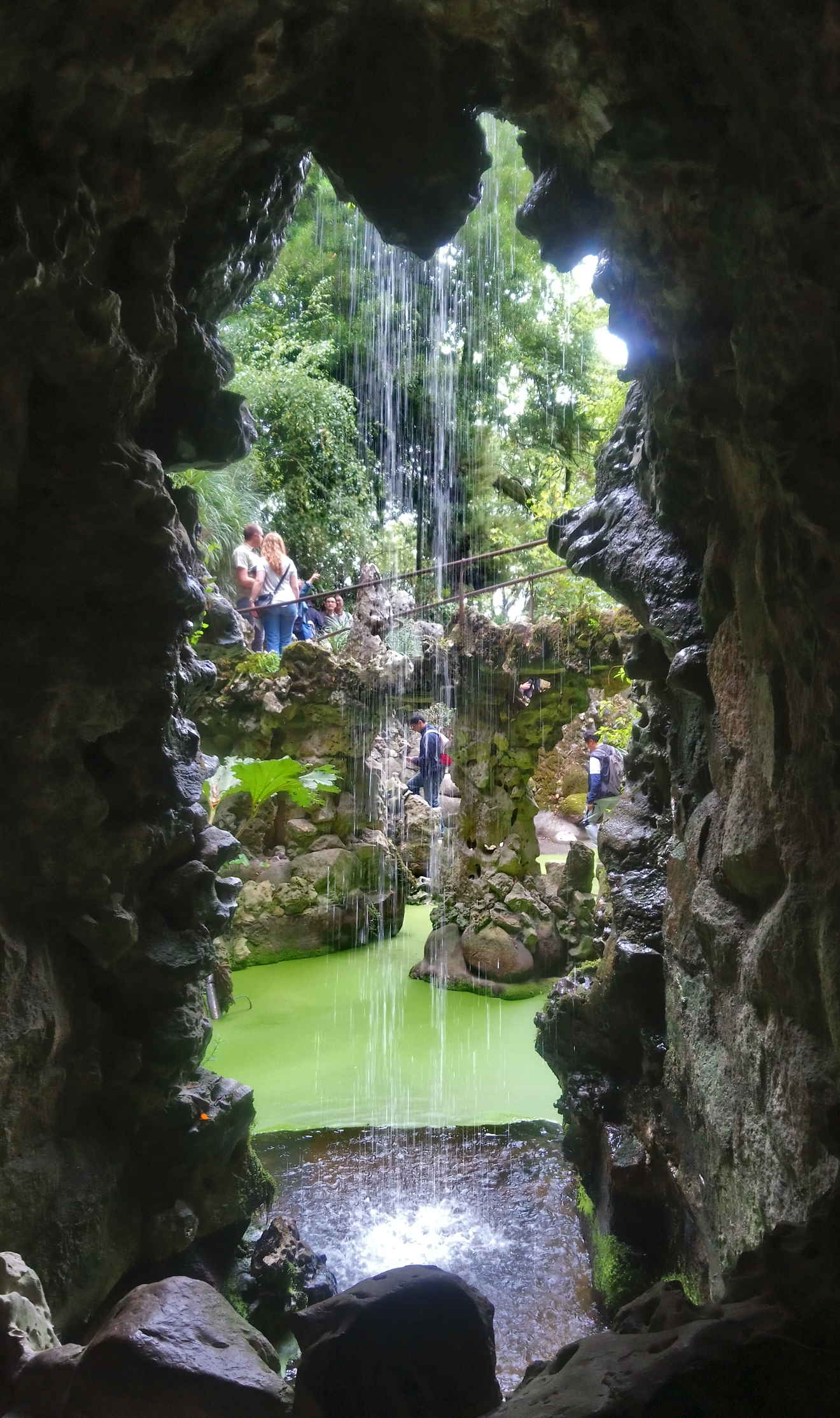 The main tourist attraction of Sintra is Pena, another large park complex with an iconic yellow and red castle. It’s about a 45 minute walk up from Quinta da Regaleira, mainly along narrow roads full of big people carrier cars and tuk tuks, but the last part is through woodland and is very pretty.

We chose not to go inside the palace at Pena and instead just wander round the park. This was probably a good idea as the palace itself was heaving with tourists so it was nice to get further away from the main hub. There were some secluded rock outcrops at the top of the park which gave some lovely views over Sintra, although the peacefulness of it all was spoilt somewhat by the noise of motorbikes racing around a racetrack in the valley on one side, and a chainsaw on the other!

We walked back down past the valley of lakes, a series of lakes with fancy duck houses in each one! Outside the park, we continued down back into Sintra town and found a lovely craft beer place to stop for a drink and a snack before catching the train back to Lisbon. 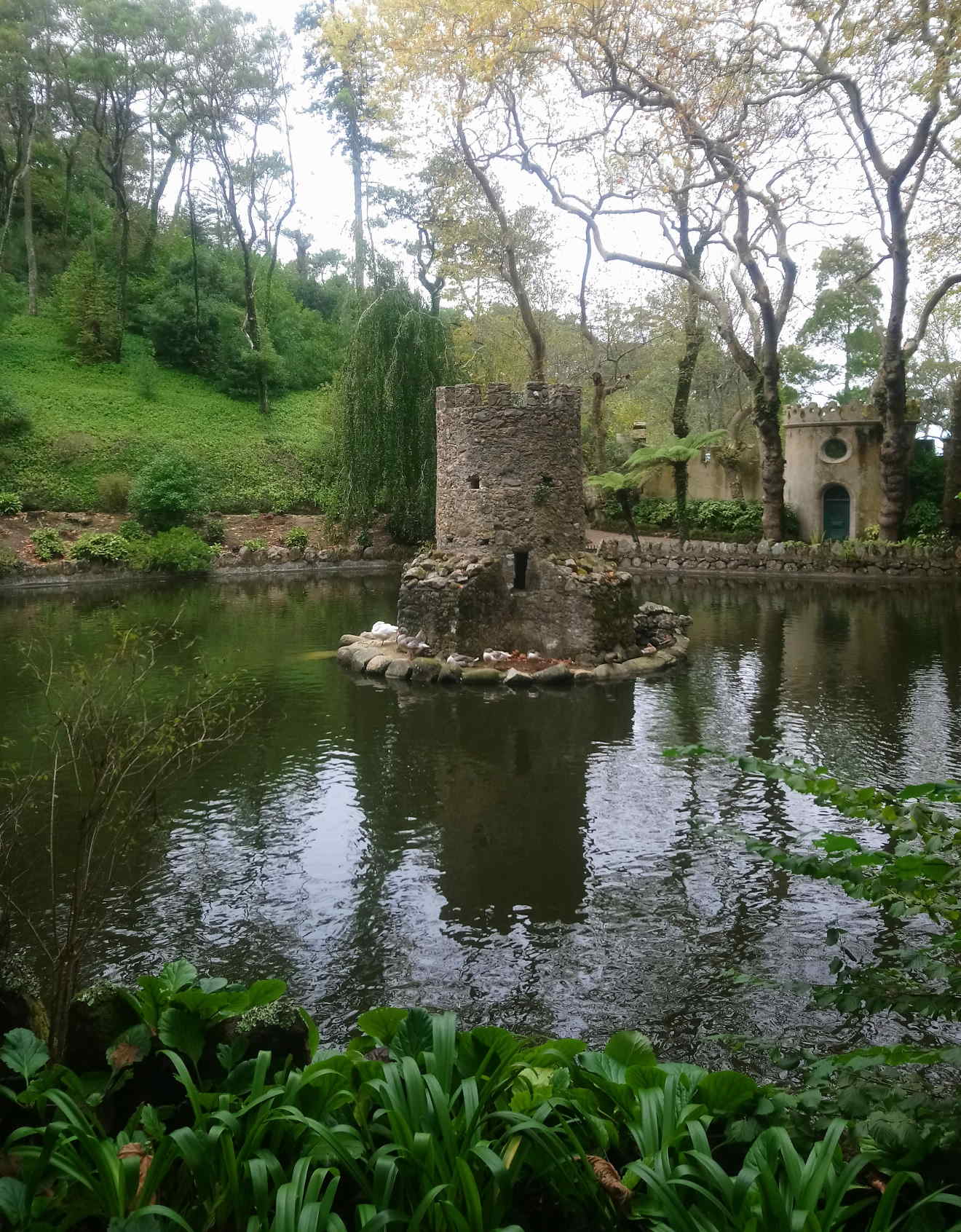 For dinner, we met up with Claire and Mat again, following which we found a little bar where we had a port tasting menu and some vinho verde. The white port was the clear winner! Again, another very enjoyable evening in Bairro Alto. 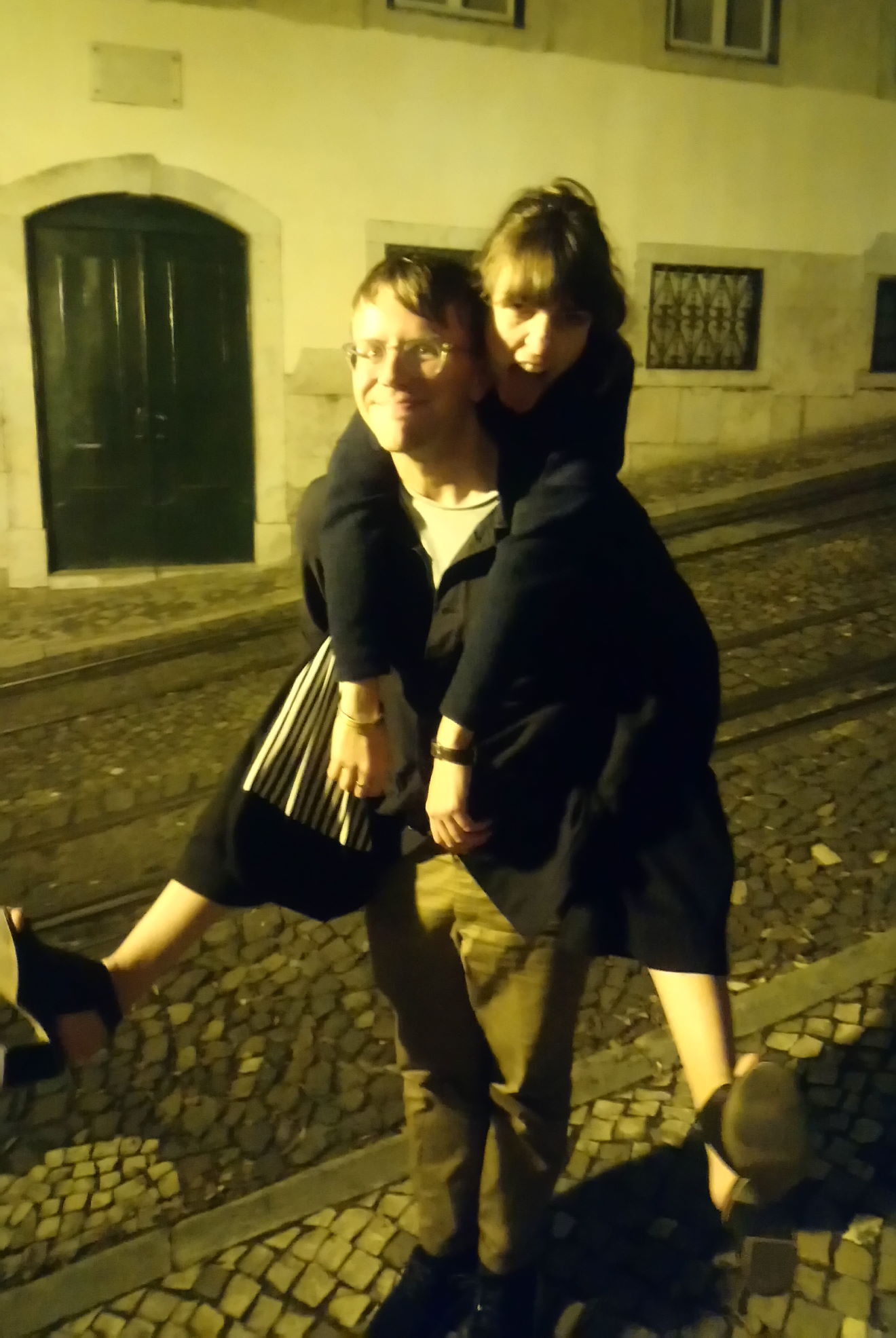 For our final day in Lisbon, we explored the Eastern side, starting at the top of Alfama and making our way down through the old town to the Sé Cathedral. There were lots of pretty streets and tiled buildings, with a couple of view points along the way. Unfortunately the weather wasn’t great so we kept having to switch between sunglasses and raincoats! The Cathedral itself was not as ornate as some others we’d seen on our trip and was spoilt slightly by the backlit info boards about the excavation and restoration currently going on, but it was worth a visit nonetheless.

As we followed the tram 28 route back down into the valley, we passed the famous tinned fish shop, selling various types of canned sardines, cod, mackerel, all in different sauces. We had some rather good tasters as we sheltered from the rain before continuing along to take advantage of a key tip from our hosts. Instead of queuing and paying to take the Elevador de Santa Justa, you can enter at the top from a walkway and get the same view for free!

By this time, the rain had become torrential, so we sheltered in a shop before making a quick dash to Manteigaria, a shop where you can watch the pastéis de nata being made. Coupled with a shot of Ginja, a cherry liquor, and covered in sugar and cinnamon, they really are tasty and a great distraction from the rain! 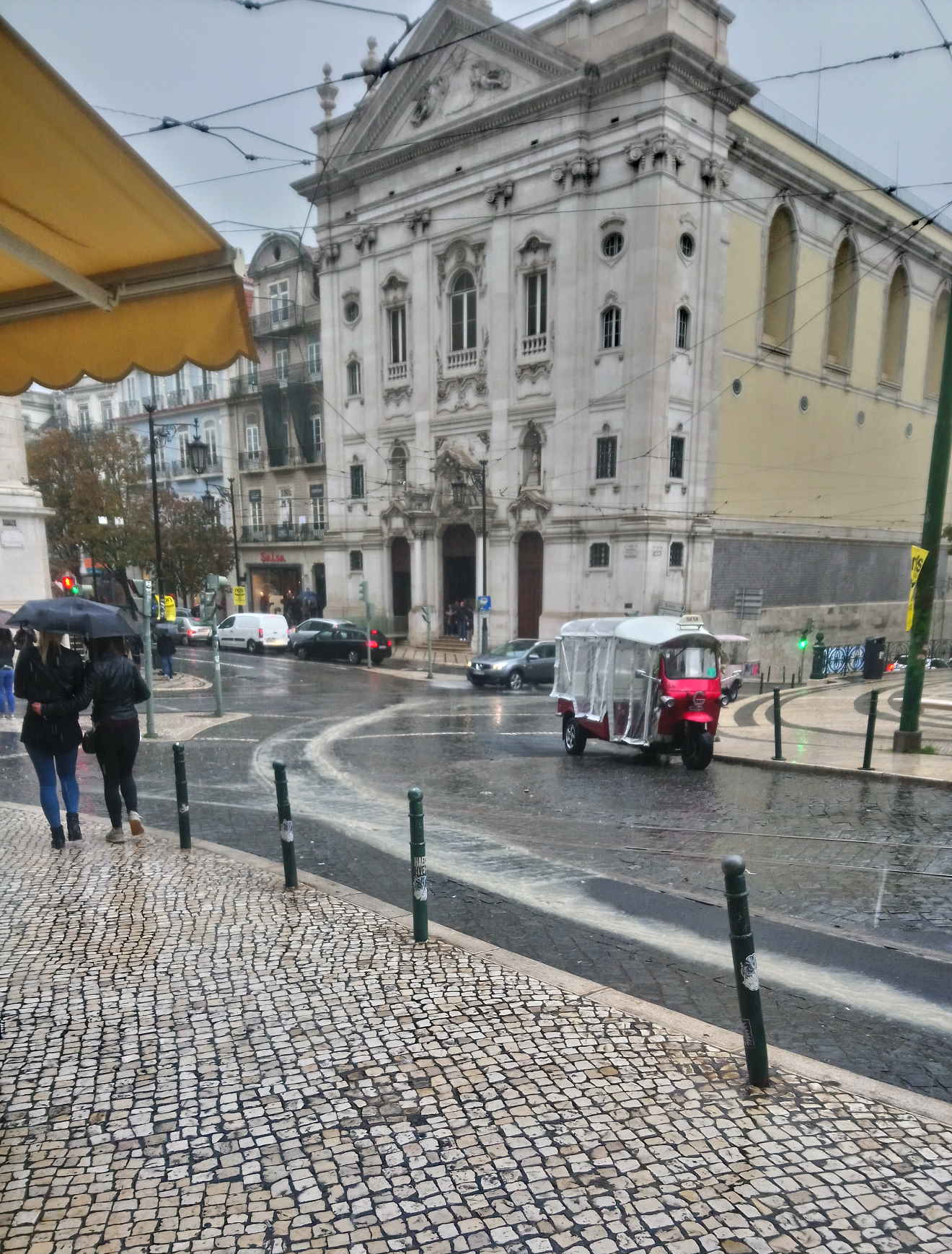 After the shower had passed, we made our way back to the waterfront for a quick seafood lunch before catching the train to Belém. By this time the sun had come out so we enjoyed wandering around the area and exploring the impressive monestary. 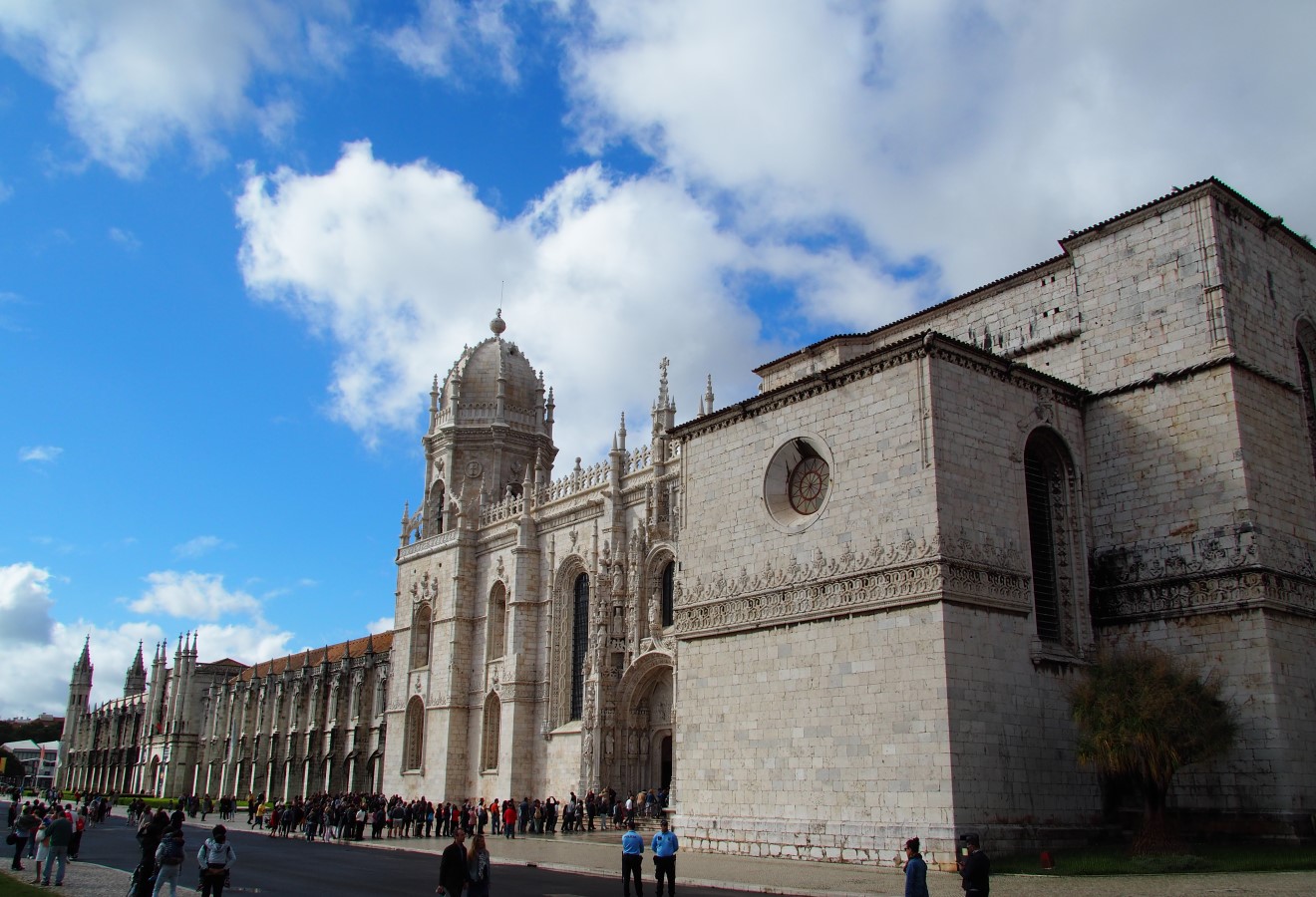 From there we wandered back along the promenade, taking in the various monuments and statues and admiring the San Francisco style bridge and Christ the Redeemer style statue on the opposite bank. We also visited the LX factory, a complex made up of lots of small shops and cafes. There appeared to be some kind of K-Pop concert being held there as the place was heaving with teenage girls who screamed every time it started to rain! 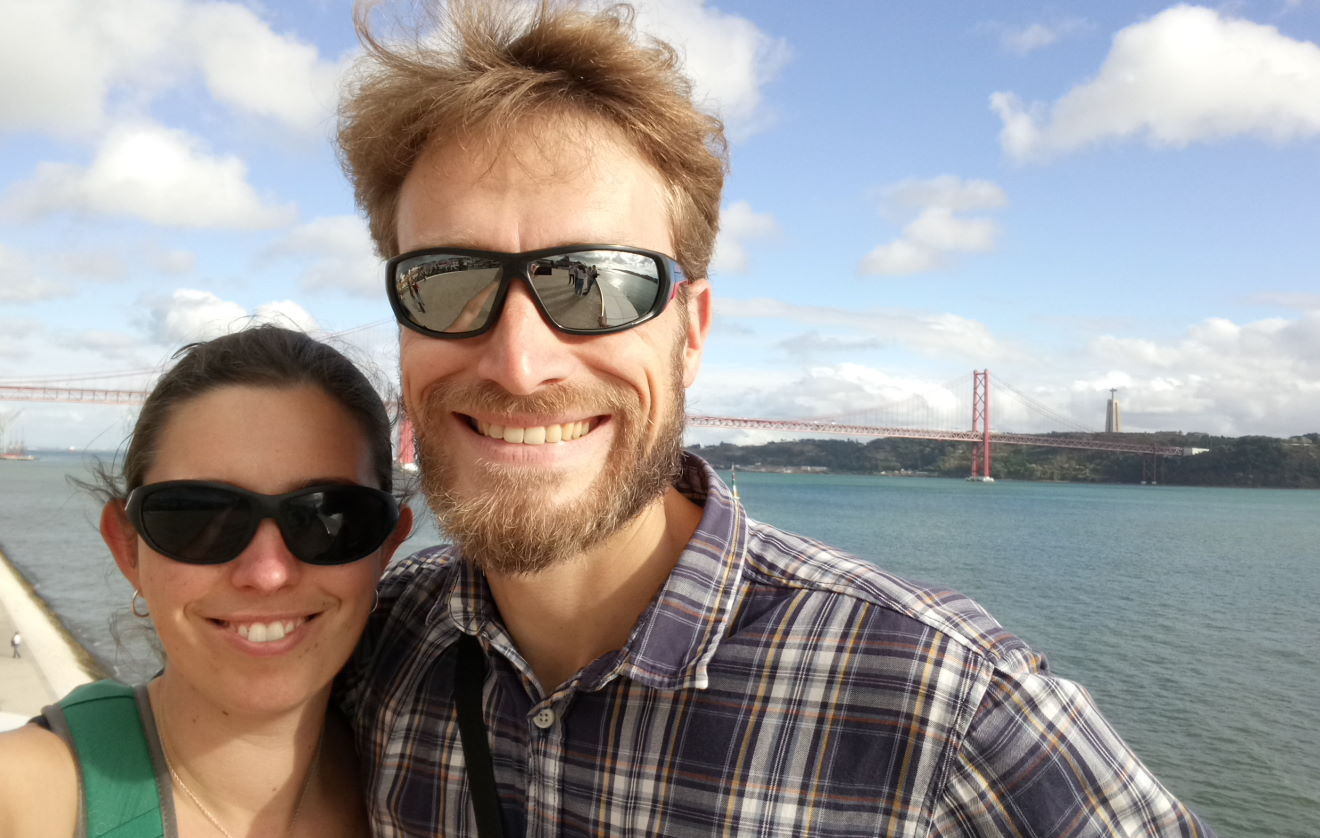 We caught the train back to the centre of Lisbon and checked out a couple of craft beer places, one called Musa which was a bar dedicated to that particular brewery, and another called Duque which was a brewpub that served its own beer and also others. Both were quite enjoyable! 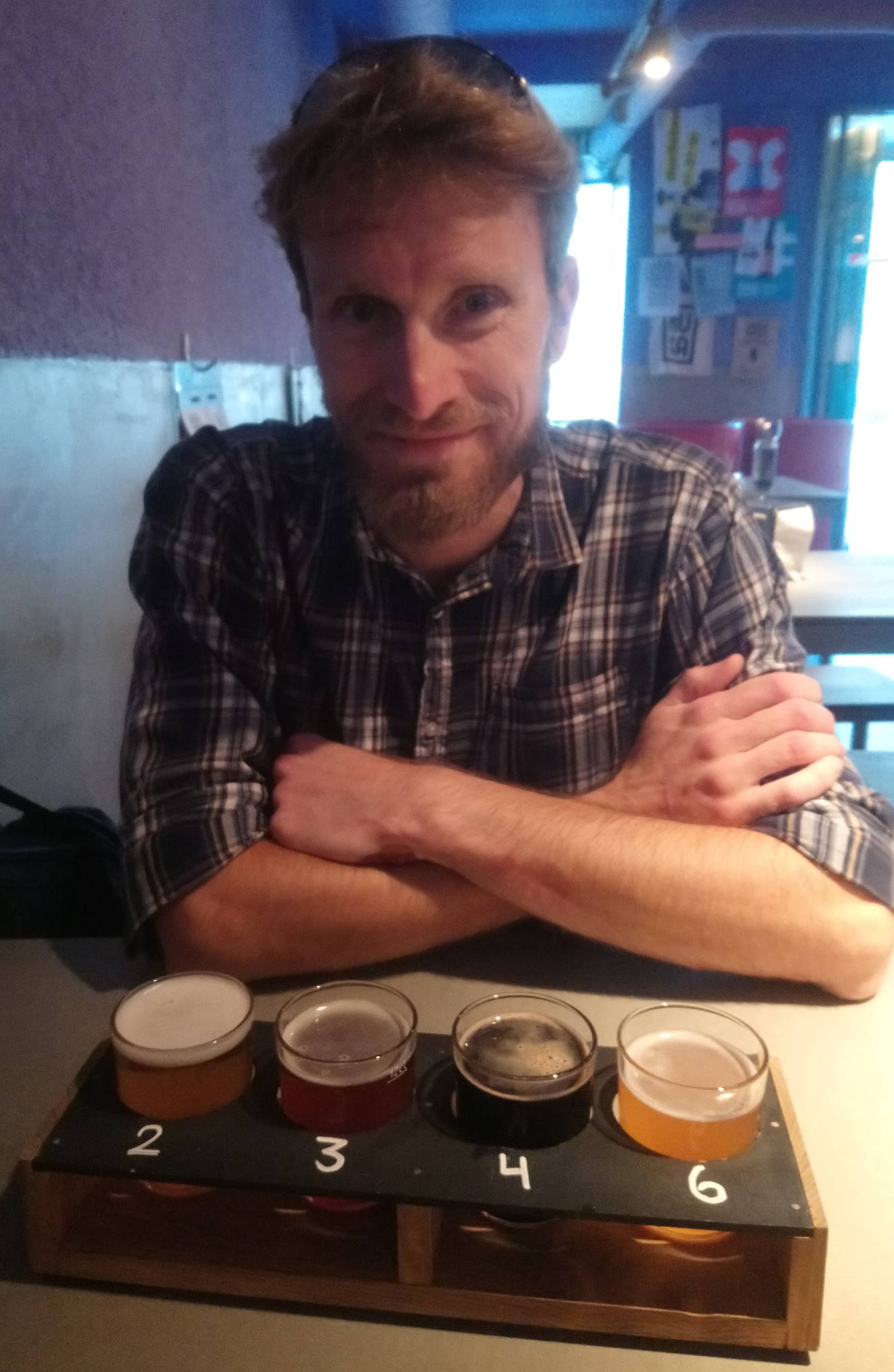 For our last night we ate at a restaurant around the corner from our apartment, which was just a little bit odd. It took 45 minutes for our drinks to arrive and then halfway through the meal, the waiter really killed the candlelit ambience by turning on the main bright light. It felt like the end of a club night when the lights go on and everyone is asked to leave! The food was tasty though and we had a good evening.

The next morning we headed back to our favourite breakfast place, Zenith Brunch and Cocktails, for some delicious pancakes. Unbeknown to us, it was the Lisbon marathon that day so the main Avenue da Liberdade was shut to traffic which was lovely. We picked up a couple of pastéis de nata for the train from our favourite nata shop, Fábrica da Nata, checked out of the apartment and headed to the train station where we managed to cheer on some of the runners before boarding the train to Porto. 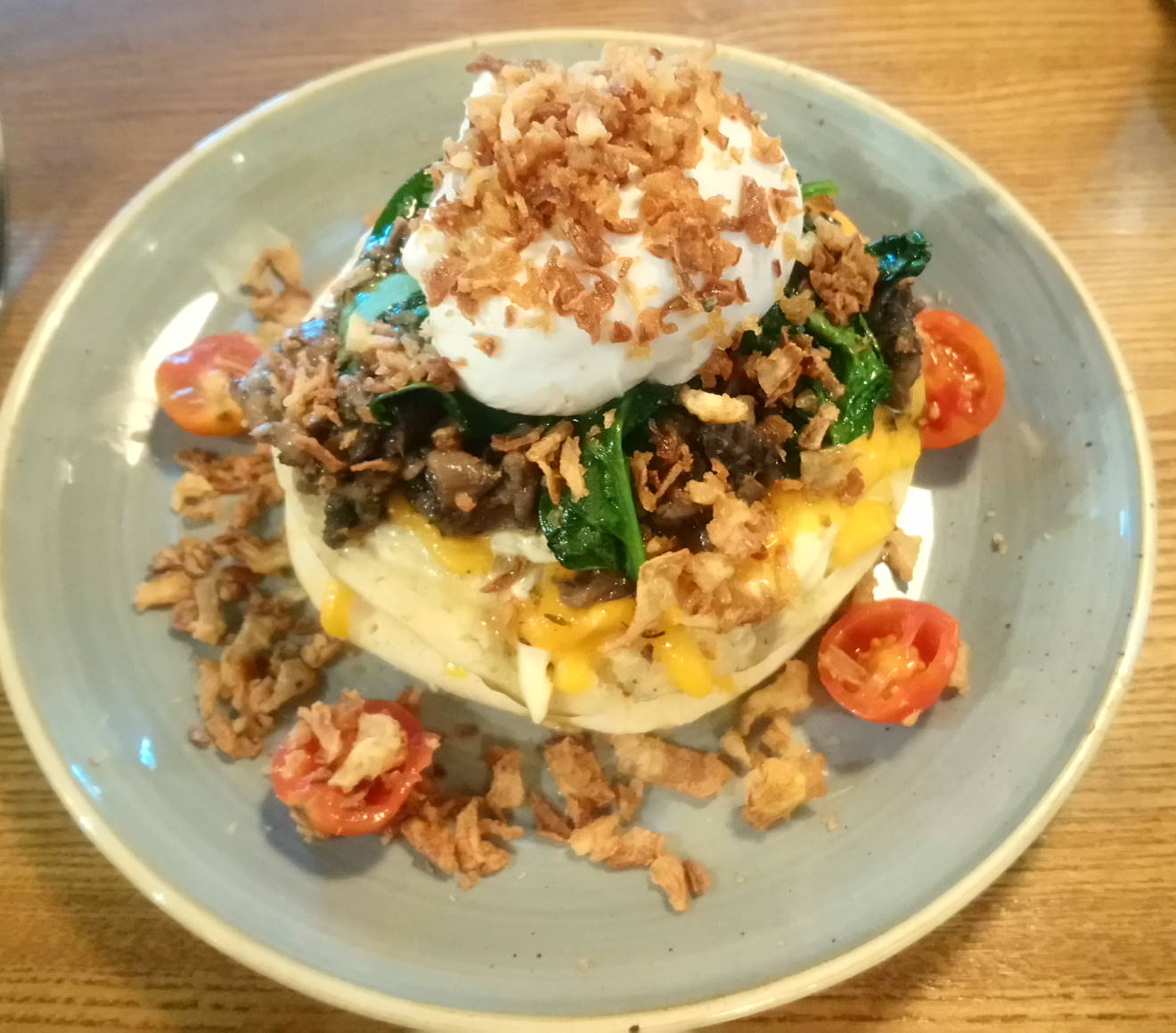 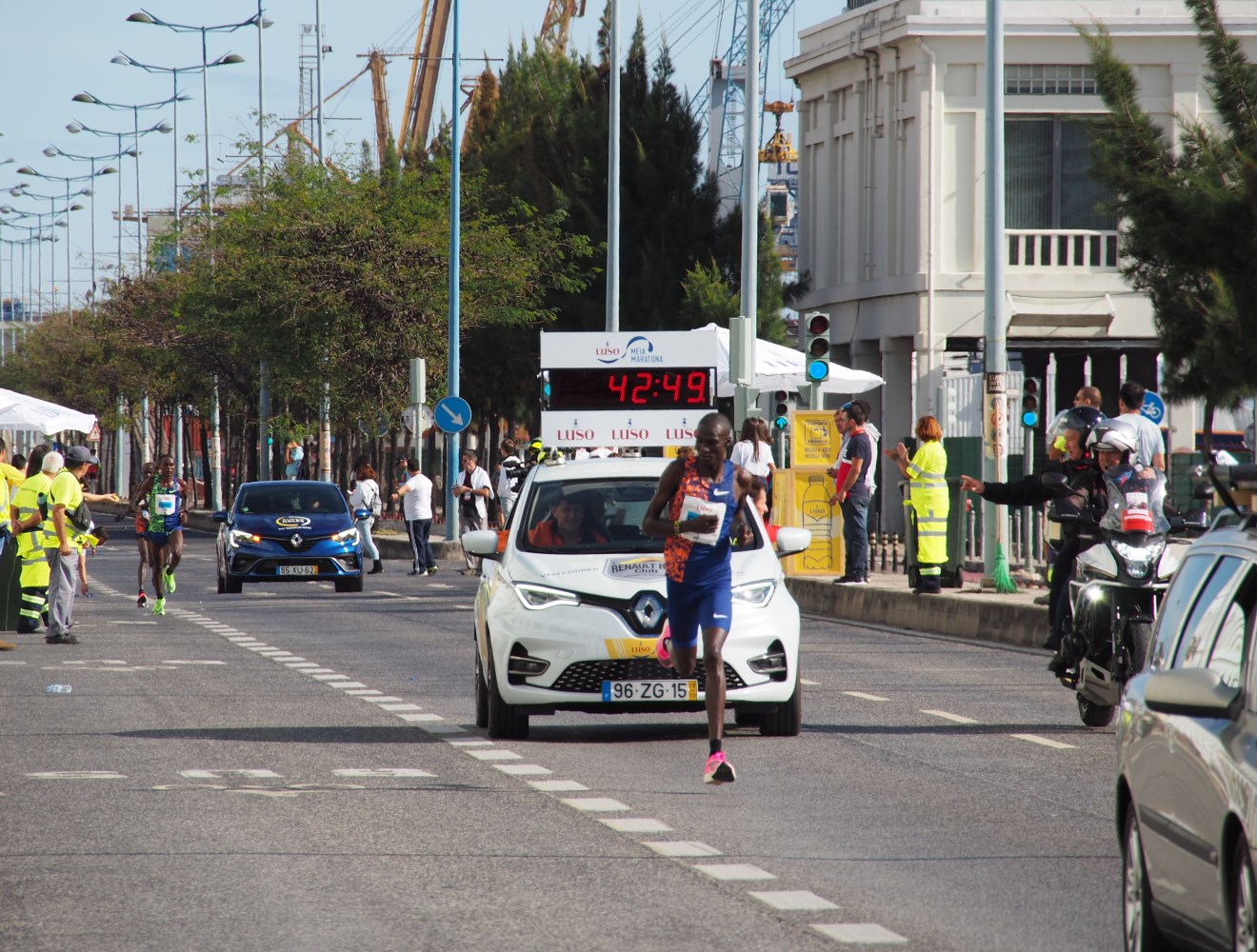 Overall Lisbon was a bit of a mixed bag, probably as a result of the weather not being great. It was much bigger than Bordeaux so took longer to get our bearings, although by the time we left we were just starting to get our head around how everything fitted together. Maybe four days rather than three would have been better. On the other hand, it was really nice catching up with Claire and Mat and taking in the nightlife in Bairro Alto. It’ll be interesting to see how Porto compares!